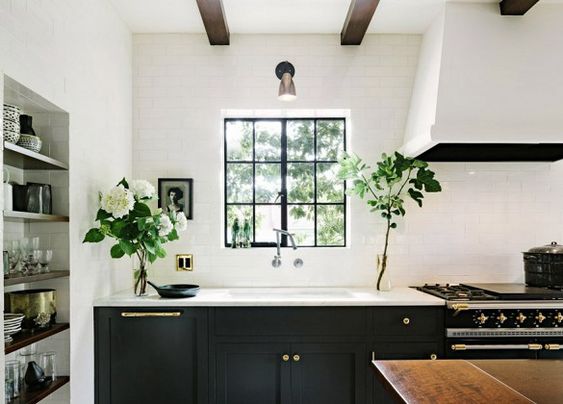 Have you been inspired by the return of Black as a trend – but don’t feel equipped to decorate with it in your own space? I’m here to help!

It’s official! Black is back in style!

For those of us who lived through the last period of black as a trend in the 80s, I think we’ve all had just the right amount of time and space to separate ourselves from those looks and move into the black of 2021.

If you’re not quite sure what the black of the 80’s looked like, I’ll leave these here for you to take it all in.

How to Decorate with Black

Because black as a color can be so powerful, I have some rules I suggest to anyone wanting to use it in their interior design.

I think too much black in a room can easily turn flat, overly masculine, and sometimes even right past the “moody” stage and straight to depressing.

I don’t want that for you, so we’ll talk about how to use black in a strategic way!

I’ve said it before and I’ll say it again, paint is the most inexpensive way to get a huge impact – especially when you use it on the walls.

Black paint on all the walls of any given space can take it a bit too far like I mentioned earlier, but it can also be done really well.

If all black walls aren’t for you, you’re in luck because even a single black accent wall can look amazing. And they’re really making waves in the design community right now!

Here are some general rules to follow when making an accent wall of your own:

With the accent wall itself you have quite a few options! You can go with a standard solid color, or for a bit more visual interest you can try wall treatments like board & batten or wallpaper.

I’ve been really intrigued by the geometric take on board and batten that’s been popping up more and more.

Instead of their boards and battens going vertically and horizontally in the more traditional style, designers are creating all kinds of shapes and designs with them – and it works really well!

Often times they’re still painted a single solid color, but with so much added visual interest and dimension! They’re like a large scale work of art all on their own!

I’ve also seen some really lovely black accent walls in a living room behind the TV which I love because it’s another way to help the TV blend into the area behind it instead of it sticking out like a sore thumb.

Be Careful What you Accent:

When you’re picking your accent wall, make sure to also consider WHAT you’re accenting. If the wall you pick also happens to have the strange dropped ceiling due to duct work, or angular connections to the ceiling, you might want to opt out of using that wall.

By creating an accent wall, you’re pulling attention straight to the wall you use. If the features of the wall you were thinking to use are actually not that exciting, I’d suggest using your paint and wall treatments there to blend rather than highlight.

Accent areas you want to show off, rather than the spaces that are more awkward or tricky!

Other Ways to Experiment As you Decorate With Black:

If an accent wall isn’t quite what you’re looking for in your current space, here are a few additional places where you can experiment with black:

If you’re not sure what to pair with black, I’ll share my favorite color combo! It’s professional, balanced, warm and inviting:

How Much Black to Use When You Decorate?

My suggestion is to have one larger focal piece, and then to accent that piece with at least three other black pieces within your space.

Having your black repeat through the room makes it feel so much more intentional and well thought out.

Which Rooms Should You decorate with Black??

The most common rooms I see having a full black accent wall are:

I think sometimes because these rooms have the easiest selection in terms of a focal wall and large furniture pieces to anchor it.

But, that isn’t to say that you can’t use black elsewhere! There are some great examples of black used in:

Used correctly, black can be either and/or both industrial and sophisticated! Its so versatile!

If You’re Thinking You’re Just Ready to Dip Your Toe In:

If even these larger pieces seem like too drastic a change from what you’re used to, but you do want to add some black into your decorating, I’d suggest starting with hardware!

Swapping out a sink faucet, for example can have a big impact!

Some Ways to Avoid Using Black:

Here are a couple of ways I’d caution you against using black.

I would not suggest getting a black couch.

Again, this isn’t to say it can’t be done well, because it can be done well! (See example below.) But I think more often than not, you’ll be tired of the trend well before the functionally of the couch has suffered at all.

Now I know this one might make some people pretty sad, but I would encourage against decorating with black window frames!

And don’t get me wrong, I think they are so beautiful! I just feel strongly that they will feel dated in 10 years.

And windows are a huge, expensive investment. I’d stick with white, and opt for black shutters instead.

I’ve talked about the difference between classics and trends before a few times on the blog, and this is one of the times where I’d suggest sticking with white frames as a more classical option.

For the same reason as above, I’d recommend staying away from black tile.

It does look stunning, but the likelihood of still loving it in 10+ years is slim, and the cost and effort to replace it is quite high.

Black as a color is very demanding on our senses, in the same way that florals can be, so using them sparingly can be important!

My final tip is to make sure you pay attention to the undertones in the blacks that you incorporate in your home.

Black can have either blue, purple or green undertones. So you’ll want to pick the one you like best and stick with that throughout for a cohesive and finished look.

In Review | How to Decorate With Black:

Treat the black within your decorating with intention and as strategic accents, and you’ll end up with a glamorous, timeless, chic and sophicated look!

If you love tips like these, I think you’d be a great fit to join my Behind the Scenes class where we talk about design tips, learn interior design skills, and grow deeper in friendships with fellow creative women in the design community!

Pin this for Later: