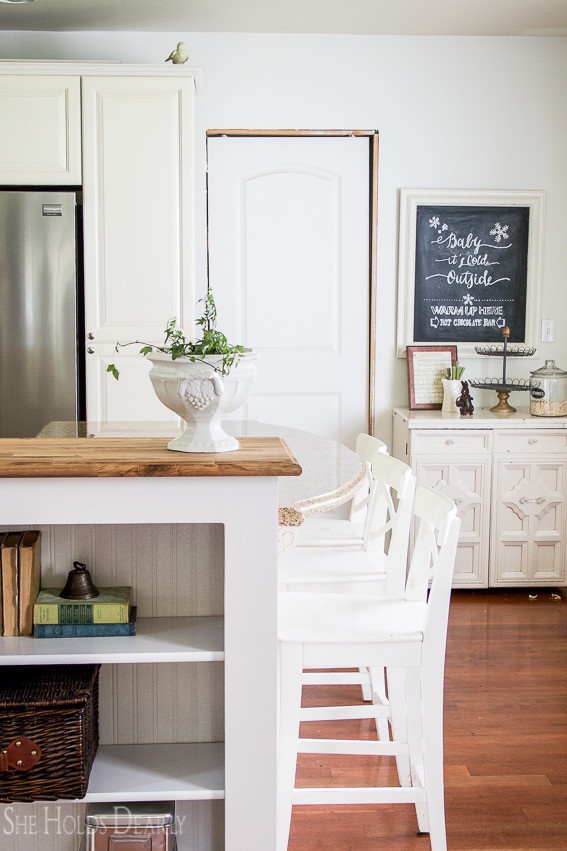 If you have butcher block counters and want to add some charm and character, it’s easier than you might think!

We recently built the  final piece to our kitchen cabinets, it is a simple bookshelf that backs up against the breakfast bar and opens into the adjacent fireside room.

In order to shake things up a bit we took a detour from the rest of the granite counters and made this countertop out of butcher block.

I was aiming for a little contrast and as the styles change decidedly every decade, I won’t have any qualms about replacing this one section of counter.  Unlike granite, which will last for literally thousands of years and initially cost me a small fortune, the butcher block will be not make me feel so bad to replace when the time comes.

We designed the end cap bookcase to be slightly higher than the breakfast bar. One reason is so the bar can be messy, but not visible throughout the entire downstairs- and even from the driveway!

I had found a huge piece of butcher block, still in the box at a garage sale this summer and had gotten a great deal on it. But, I had wanted it for our laundry room remodel and if we cut a piece out of it for the kitchen it wouldn’t leave me with enough left for the laundry room countertop.

In the end, we decided to just bite the bullet and pay full price for a smaller piece of butcher block from IKEA. It stung a little, paying four times as much for a much smaller piece than what I found garage saling.  But, sometimes a girl’s gotta do what a girl’s gotta do. If you average the prices maybe that’s a good way to look at it.

When we went to cut the counter down, I decided I wanted a softer, more detailed edge to it than just the standard square edge.

The original edge on my granite counters had been a simple bull nose (rounded) and I had my stone cutter change it by adding in what is called an ogee cut on top of the bull nose.

I guess you could say we were living on the edge.

I have really loved the edge on our granite, so we continued that look on the butcher block.

The following pictures were taken by my husband.

He loves photography for its journalistic capabilities and I love it for artistic reasons. Hence, before blogging I rarely took before or in process pics.

Its a good thing he’s around.

First, you router along the top of the counter edge with a 1/2 inch roundover bit, setting it at a depth of 1/8 inch. See the little step down there?

Flip the counter over and router along the bottom with the same bit to get two rounded corners.

Do not set any depth this time.

Then, finish with a 1/4 inch round nose bit to complete the ogee cut.

Note, only half of this bit is making contact with the butcher block because you are just taking out that little 1/8 inch strip you left before. 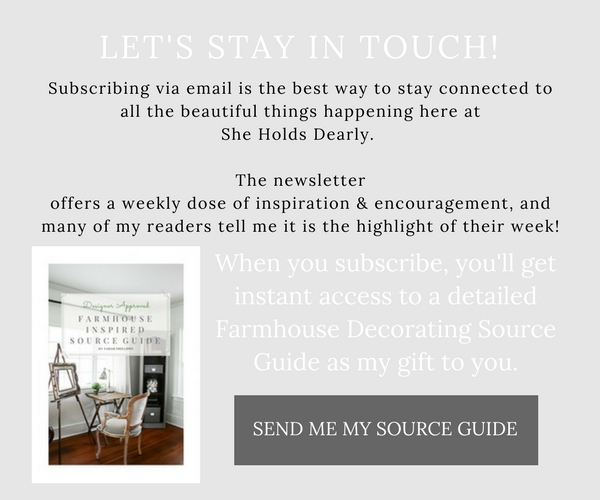