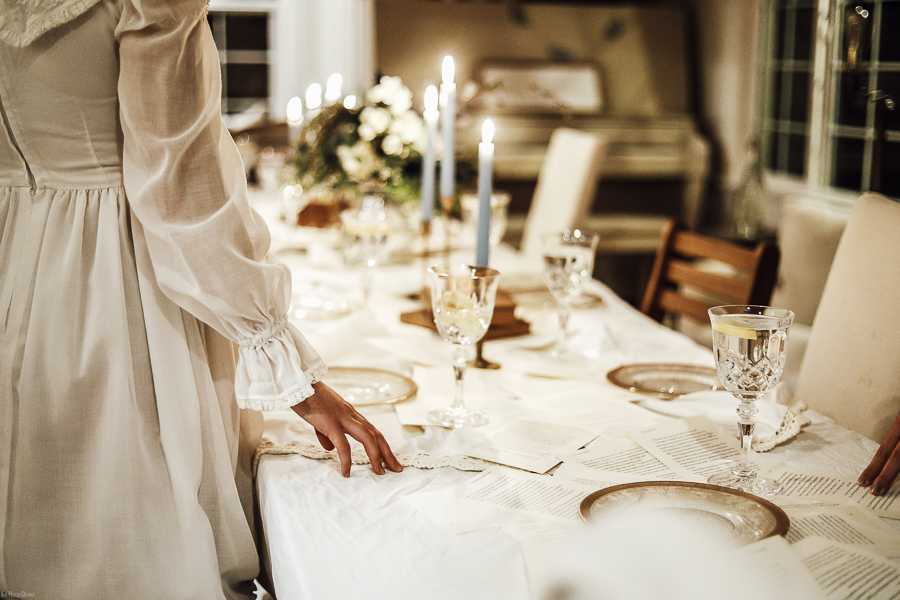 When the kids were little, their themed birthday parties were the highlight of my year.

I had files and Pinterest boards going for each of them and would shop garage sales and clearance items year round, literals planning three years out (!).

Crazy? Maybe, but in my mind it was just super fun and my favorite creative outlet as a stay-at-home, homeschooling mama of three.

As it turns out the things I learned during those parties, translate quite well into Vacation Bible School decorations these days.

I am not nearly as invested in the kids’ birthday parties as I used to be since they have each passed the age of ten and have their own opinions on what they want.

But, you can imagine my delight when my youngest announced that this year’s birthday party should be a Jane Austen’s Pride and Prejudice theme!

We quickly decided on blue toile as our inspiration and found these beautiful invites on Etsy.

Next, was the decision on the dress. I knew I didn’t want to sew one, but could handle needed alterations.

We splurged and ordered this pretty thing off Amazon.

Decorations were simple, with Union Jack pendants on the ceiling. For the table, a book page runner down the center with blue taper candles of varying heights and a large bouquet of wildflowers.

I pulled some vintage, patriotic decorations from my stash and set those up around the room, as well. I already had most of the decorations and only had to pay for the blue candles.

For the food, I hit Costco for croissants (grilled ham and Swiss sandwiches), veggies, berries for fruit kabobs and a cheeseball to represent Mr. Collins. Ha!

I grabbed a couple of pretty little desserts from the fancy food refrigerator section to take the place of a cake and poured lemon water for drinks.

We used some old books, painted gold and all my blue transferware dishes for the food. I had some fun little blue birds from a garage sale and a tall lantern that I added in, as well.

These sweet little cupcake toppers were the perfect touch to dress up the desserts.

I am attaching a printable so you can make your own. Just print them on cardstock, cut out and tape to toothpicks. Voila!

Once the guests arrived and ate, they played a card game called Marrying Mr. Darcy for fun. The object of the game is to get proposed to and it’s pretty funny all the things that happen along the way.

Whoever got “proposed” to got to pick out a “wedding gift” from a stash that I had created. I filled a basket with funny mugs, tank tops and shortbread cookies.

I had originally found the mugs and tank tops on Etsy, but in an effort to conserve money, had the mugs made at Costco and printed out labels to add to some el cheapo tank tops I found on Amazon to create the Mr. Collins work out tops. You can use my designs for the mugs by clicking here.

Click on the button below for the cupcake toppers and printable for tank tops!

We ended the night with presents and watching the movie, of course.

Some of girls had never heard of Jane Austen or Pride and Prejudice, so it was a really memorable way to introduce them to some classic British literature.

They stayed up way to late and I wore ear plugs to get through it, as you may know from past slumber party experience.

In the morning, we served a simple breakfast of pancakes with whipping cream and berries and sent the ladies on their way.

I hope you enjoyed getting a peak into our special evening and get to throw your own Pride and Prejudice party in the near future.

Do you think we made Jane Austen proud with our party? Let me know in the comments which part was your favorite!!